Have you heard of the Amero? I bet you haven’t. If things go according to plan it will become a big part of your life. Especially if you live in the United States. You see, it’s replacing the U.S.Dollar. 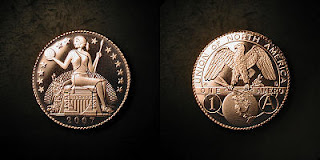 While you screaming “Hell No!”, I might take a little time to give you some history. I was stationed in Germany from 1985 until 1990. When I got there, the Deutchmark was doing pretty good and you had to show your passport (or military I.D.) to cross the border into France or Belgium. 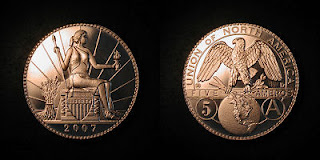 The DM was at it’s high point in 1985 and declined steadily until I left. As talk about a European Union grew, the passport checkpoints were dropped. You could then blow right across the French border at about 100mph. 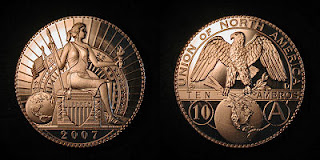 The family took advantage of this one weekend and went to Luxembourg. I wanted to go to the American Cemetery there and visit Patton’s grave. While there we had lunch in Luxembourg City. After lunch we did some sight seeing and came across the Capitol Building for the United States of Europe. I was impressed with the flag.

In 1990 as I was leaving Europe there was talk of the Euro. A common European currency that France and The United Kingdom were fighting against, tooth and nail. As you might know, the Euro is now the single currency in Europe. 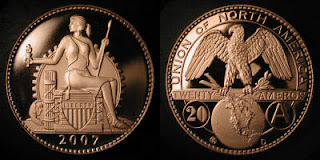 So much for the history lesson. Almost. By now you might be getting the feeling you’ve heard of this somewhere before. Does the term NAFTA sound familiar? The North American Free Trade Agreement allows for international trucking to travel unrestricted from Mexico to Canada. Sound familiar? 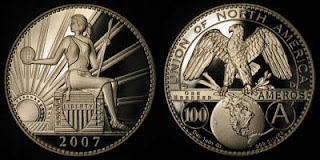 For now it’s a hypothetical currency. The proposed single currency for North America. It is the idea of Canadian conservative Herbert G. Grubel. 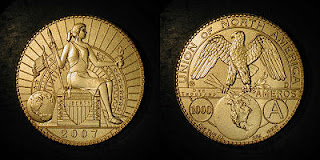 Is the Amero the next logical step in the creation of the North American Union? I think so. I also think not enough people are taking this seriously. Like the frog slow boiled in the pot, the Globalization of the U.S. is coming at us slowly, incrementally like it was in Europe.

Have faith True Believers! There are a couple of significant obstacles for implementing the European model here in good ‘ol North America.

3. The American citizenry is armed courtesy of the Second Amendment. An armed revolt is a distinct possibility should any attempt be made to abolish the Constitution and fold the U.S. into a North American Union. The U.S. public needs to be disarmed. Keep this in mind the next time the gun debate is in the news.

At this point the Amero remains hypothetical but is also on the edge of becoming a reality. The coins pictured here are parodies designed by Daniel Carr. Carr offers these parodies to focus attention on the debate for and against the Amero. He urges, as do I that the U.S. public voice their opinions whatever they may be about the Amero.

I am against the Amero in theory and application. I fear that it is a harbinger of attempts to destroy the Constitution and subvert the U.S. into the One World Order .

What do you think?

4 thoughts on “What’s in Your Wallet – The Amero?”