10/16/2008 – NELLIS AIR FORCE BASE, Nev. – A training weapon fell from an Air Force aircraft on a training mission and struck a vehicle traveling on a road adjacent to the base Oct. 15, said Nellis Air Force Base officials. 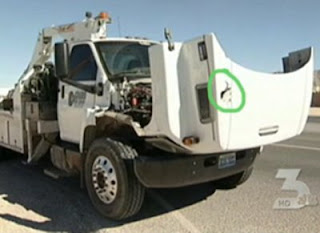 The Air Force reports that the weapon, a 25-pound BDU-33, landed near a mobility warehouse on the base before bouncing into the road and striking a civilian vehicle. 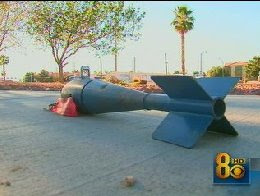 The driver was not hurt.

Rumors on Nellis AFB are saying that the bomb was dropped from an A-10 aircraft.

The training bomb is used to simulate the ballistics of real air-to-ground weapons and does not carry explosives. Instead, it carries a small smoke charge used to mark the device’s impact point.

The Air Force is remiss in admitting it, but this happens from time to time. In 2004, my old F-16 (84-1292) is being flown by the New Jersey Air National Guard. It strafed a middle school one night. Read more about that here. In March, a BDU-33 fell from an F-16 over Tulsa, Okla., striking an apartment building. In January 2007, a training bomb flying on an A-10 fell into a South Korean factory. And in January 2004, a BDU-33 fell from an F-15E and into an English industrial area. No one was injured in the accidents.

The most famous “dropped object” happened when a B-36 dropped an unarmed nuclear bomb and hit an elementary school in Rapid City Iowa.

One thought on “USAF Shacks a Truck. Whoops!”