It was announced on October 31, 2007 that Washoe an African chimpanzee was dead at the age of 42. 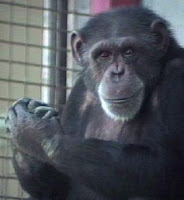 “So what?”, you might ask. Washoe was a special chimp. She could talk. No, not like “Planet of the Apes”. She was taught to used American Sign Language.

Over the years, her vocabulary expanded. She also “made up” words. Swan, for instance was “water bird”. Watermelon was “drink food”. She had a life long fascination with shoes. She would always check out the shoes worn by visitors to her compound.
She’d chat about them and their color and such.

When she finally mated, researchers were keen to see if she would teach ASL to her offspring. On one amazing day, researchers were entering her compound to check on her and her babies. They were startled when her mate became enraged and charged them. An enraged full grown male chimp is a fearsome, dangerous thing. Don’t confuse them with baby chimps wearing hats.

As a reflex, a researcher flashed the sign for “stop” and to their amazement the male stopped dead in his tracks. Taking the opportunity, the researcher signed “What’s wrong?” The male then signed, “Babies sick, Washoe upset”.

In addition to teaching her mate, Washoe did indeed go on to teach her children. But she remained the most “talkative” of the troop.

She was named for Washoe County, Nevada, where she was raised and taught to use ASL.

After a short illness. Washoe died in bed at age 42, surrounded by staff members and other primates who had been close to her.

Washoe had lived at Central Washington University since 1980; on October 31, 2007, officials from the Chimpanzee and Human Communication Institute on the CWU campus announced that she had died the previous day.