Right up front, let me tell you that I LOVE to fly.  Whether it’s a jumbo jet or a teeny, tiny prop job….yeah…LOVE IT.

With that out of the way let me tell you I got to fly last week. From Las Vegas to Charleston, South Carolina with a short howdy in Houston.  It had been a couple of years since I’ve flown and a lot has changed.

Our adventure started at the economy parking lot. Which was huge.  I was dragging my suitcase out of the car and wondering how long a hike it was to the shuttle bus stop when Rosie (my travel companion and awesome daughter) said “The bus is here”. Yay bus.  The driver actually waited for me to schlep over to him.

Once in terminal we checked our bags and started a trek past strategically placed stores to the TSA minions. We had been warned about allowing an hour for SECURITY PROCESSING, but there was no line. I was thinking about videoing Rosie going through the full body scanner when we were sidetracked to the good ol’ metal detector. In, out and through in less than two minutes.  It took longer to wait for our junk to come out of the x-ray machine.  Watching the process, it did look like the cute chicks were sent through the full body scanner and the families with small children were bypassed.  Is this profiling? It gave me a weird feeling that I was watching some modern day version of RAMP SELECTION.

We got to our gate with about an hour to wait.  I used the time to people watch.  It seems that the flying public has been reduced to sandals although

there were some hold outs and dinosaurs still wearing sneakers. For the record we were wearing CROCS.

Boarding was kinda of fun. Fun if you were handicapped, flying with pet stage children or rich enough to buy an A ticket. We were back in the “B” section. That meant that by the time we were on the aircraft  we were in for a mean game of musical chairs.  I sent Rosie down the aisle first hoping the cute factor would kick in. This plan failed miserably  and she got the last aisle seat in the back. I got the aisle seat in front of her because the lady sitting next to me didn’t want to budge.

By now you know we flew on Southwest. For professional reasons, I was hesitant to climb aboard a 737. The tendency for the aircraft  having a sticking rudder actuator or patio seating. I did notice that we got to fly a 700 series so at least it was a new one.  With no in-flight movie I settled into some high altitude people watching.  It’s been a long time since 1981 when I noticed that fellow passenger pounding away on his watch and said it was a game.  On a trip back from the bathroom I counted not less than six iPads showing six different movies. Among them I recognized  …

“Island in the Sky”

I also note that a baseball game broke out in the row in front of me. Two kids linked their PSP’s together and it was MLB The Show. Cincinnati versus New York.  I had fun watching the game and it ate up a lot of flight time.

Aside from the landing when we returned to Vegas (which I can only describe as an impact), I enjoyed flying Southwest and would again. Be sure to pack a lunch.

Have you flown on Southwest airlines lately? Everything okay? What luck!

The inspections centered around early detection of skin cracking. Anyone remember Aloha Flight 243 . The one that suddenly offered patio seating in first class? 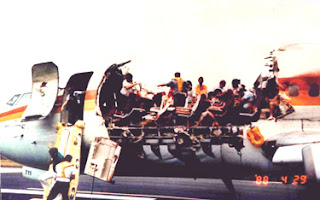 Calling it “one of the worst safety violations” he has ever seen, Rep. James Oberstar, D-Minnesota, is expected to call a hearing as soon as possible to ask why the airline put its passengers in danger.

But Southwest Airlines — which carried more passengers in the United States than any other airline last year — said there was never a flight safety issue.

“The FAA penalty is related to one of many routine and redundant inspections on our aircraft fleet involving an extremely small area in one of the many overlapping inspections. These inspections were designed to detect early signs of skin cracking,” the airline said in a statement Thursday evening. Read Southwest’s entire response.