The Pastor was doing the Sermon and was on a Roll. “You can tell a person’s obsessions in the names they give their children”.

He asked the mother in the first pew what she named her daughter and she said “Penny”. So the Pastor tells her she’s obviously obsessed with money.

In the second row sat another mother with her daughter, Brandy.  “You’re obsessed with alcohol!”, the Pastor declared.

Suddenly, a mother grabs her son by the arm and gets up, saying “C’mon Dick, let’s go.”

During these serious times, people of all faiths should remember these
four religious truths:

1. Muslims do not recognize Jews as God’s chosen people.

2. Jews do not recognize Jesus as the Messiah.

3. Protestants do not recognize the Pope as the leader of the Christian world.

4. Baptists do not recognize each other at Hooters.

John O’Reilly hoisted his beer and said, “Here’s to spending the rest of me life, between the legs of me wife!”

That won him the top prize at the pub for the best toast of the night.

He went home and told his wife, Mary, “I won the prize for the Best toast of the night”.

John said, “Here’s to spending the rest of me life, sitting in church beside me wife.”

The next day, Mary ran into one of John’s drinking buddies on the street corner. The man chuckled leeringly and said, “John won the prize the other night at the pub with a toast about you, Mary.”

She said, “Aye, he told me, and I was a bit surprised myself. You know, he’s only been there twice in the last four years. Once he fell asleep and the other time I had to pull him by the ears to make him come.”

Father O’Reilly was giving one of his Question and Answer sermons and Bob was falling asleep.  Every time he’d doze off his wife would poke him with her hat pin.  It went something like this:

Father: “Who died for your sins.?”

Bob gets poked and jumps up screaming. “JESUS CHRIST!!”

Father: “What are the wages of sin?”

Bob gets the business end of the hat pin again and shouts, “DAMN YOU!!!!”

Another correct answer.  But for a third time Bob nods off and Father O’Reilly asks:

“What did Eve say to Adam on the birth of their first son?”

Bob jumps up again screaming, “YOU STICK THAT IN ME ONE MORE TIME AND I’LL BREAK IT OFF!!!!”

A Mother had 3 virgin daughters and they were all getting married within a short time period. Because Mom was a bit worried about how their sex life would get started, she made them all promise to send a postcard from the honeymoon with a few words on how marital sex felt.

The first girl sent a card from Hawaii two days after the wedding. The card said nothing but “Nescafe”. Mom was puzzled at first, but then went to the kitchen and got out the Nescafe jar. It said:

“Good till the last drop”.

Mom blushed, but was pleased for her daughter.

The second girl sent the card from Vermont a week after the wedding, and the card read: “Benson & Hedges”. Mom now knew to go straight to her husband’s cigarettes, and she read from the Benson & Hedges pack:

She was again slightly embarrassed but still happy for her daughter.

The third girl left for her honeymoon in the Caribbean. Mom waited for a week, nothing. Another week went by and still nothing. Then after a whole month, a card finally arrived.

Written on it with shaky handwriting were the words “Southwest Airlines”. Mom took out her latest Harper’s Bazaar magazine, flipped through the pages fearing the worst, and finally found the ad for Southwest Airlines. The ad said:

“Three times a day, seven days a week, both ways.” 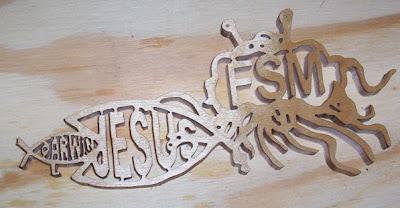 More about the Flying Spaghetti Monster