Some are.  Some are not.  My personal favorite was Ham Slice.  The only piece of real meat in the US system. We have recipes.

Take all the drink components.  Coffee, orange drink, creamer, sugar. Mix together. Can be served both hot and cold.  Drink.

Don’t get excited, there is no bread.  Every MRE comes with John Wayne Crackers.

With Menu 2, Tuna and Noodles you can make a tuna fish sandwich. Season to taste.

Menu 8 is the Ham Slice which makes an excellent ham sandwich if you slice it thin and use the Cheese Spread.

That beats the ass off of our MRE’s.

Menu 5, Spaghetti with meat and sauce.  Another favorite served both hot and cold.  It came with a tiny little bottle of Tabasco Sauce.  To this day, I put Tabasco in my spaghetti.

MRE’s come with heaters now.  Back in the day, we had to improvise.  I was in the Air Force.  If the F-16 was launching, I’d clamp a packet back where the exhaust would heat it up.  Distance to the exhaust took some experimentation. Too close and the meal would blow out the back or explode.  If the jet was broken and a  “-60” power unit was in use, you just clamp the packet with Vice-Grips and (with gloves) roast in the 60 exhaust.  Another option was to use the heater in the crew chief shack.  Just laid them on top.  When they puffed up, they fell out perfectly heated.

There were rumor of new menus.  Steak and Pancakes.  Ours were made in 1968 so no new menus for us.  However the Maple Bar was a doughy piece of delight that tasted like pancakes and syrup.  I’d save that to eat for breakfast when the sun came up.

Menu 3, Beef Patty with Bean Component.  We never ate the Beef Patty.  It had ants in it.

Menu 4, Omelet with Ham.  The cats wouldn’t it this shit.  We force the Iraqi prisoners to eat it.

Chief Killian said we HAD to eat the MRE’s because there would not be fast food in combat.  When we went to war in Desert Storm, Haji would bring 16 Pizza Hut Large Supremes right to the shelters of out F-117’s.

What was your favorite?  What did you refuse to eat.

Pete on facebook posted something that looked photoshoppy.  The crack investigative team here at The Puppy  separated fact from fiction.  Fiction lost.

Yes, Loyal Readers some creative/sick people have taken Holiday dinners to a place no one has gone before.

Take one unspeakable thing. Turkey, whole. Season it will the usual shit you do every year and cover tightly with foil.

Add an unknowable horror from beyond imagination. Octopus, whole. Dust the octopus with lots and lots of Rigani (You can use Oregano, you cheap bastard.), freshly ground black pepper and just a pinch of sea salt. Pour over with olive oil and Pinot Noir  (In that order and DRINK!) then throw some of that Rigani on the Turkey while you’re at it. Stuff the Octopodiformes  octopoda into the Meleagris gallopavo.  Let tentacles dangle decoratively out of the Turkey.

Cover everything tightly with foil.

Bake in a pit of eternal darkness  at 350 for two and a half hours.

Remove foil after one hour and 15 minutes. 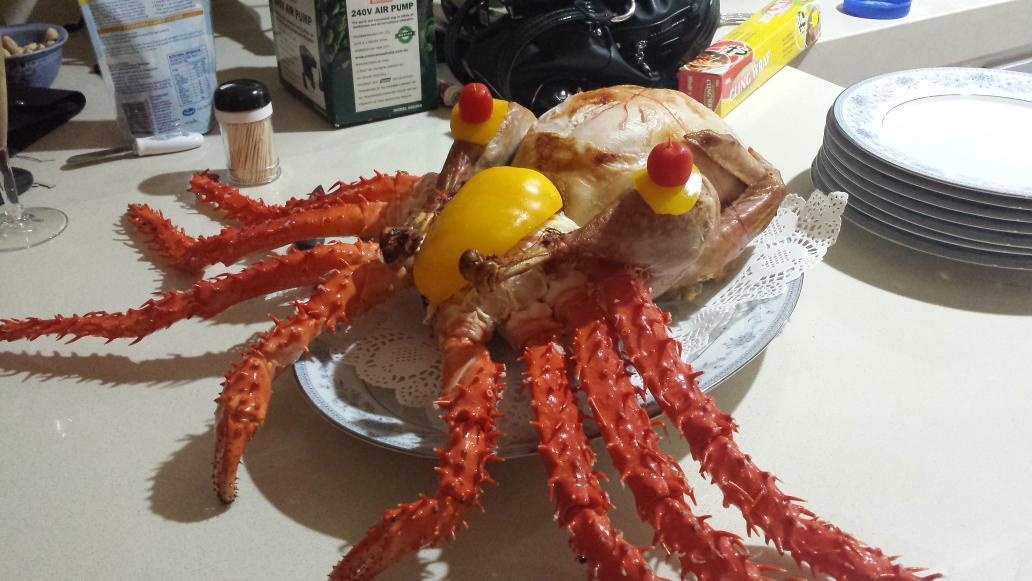