Sometimes listening to Democrats is funnier than MadTV. I humbly submit for your consideration, these true quotes…..

“And there is no reason, Bob, that young American soldiers need to be going into the homes of Iraqis in the dead of night, terrorizing kids and children, you know, women, breaking sort of the customs of the–of–the historical customs, religious customs. Whether you like it or not..”
-Sen John Kerry on ‘Face the Nation’ 4 DEC 2005

Nice to know your still hate the U.S. Military, John. FYI: The other guys are the terrorists, not us.

Yeah, but I still didn’t vote for you.

“The idea that we’re going to win the war in Iraq is an idea which is just plain wrong”.
-John Dean 5 DEC 2005

BEHOLD! John Dean the flaming pillar of knowing what’s right or wrong. Draw near and hear his words.
“YEEEHAAAARRRRGGG!” Thanks John, please sit down. The adults are talking.

“I do not believe that we should allow this to be an open-ended commitment without limits or end. Nor do I believe that we can or should pull out of Iraq immediately.”
-Sen Hillary Rodham-Clinton

Another good example of why Harry should drink at home…alone. Harry, please move to Virginia and stop embarrassing Nevada.

“We should follow the lead of Congressman John Murtha, who has put forth a plan to make American safer, to make our military stronger and to make Iraq more stable. With his dramatic call for a quick pullout of US troops from Iraq Mr. Murtha has changed the debate in our country.”
-Rep Nancy Pelosi 1 DEC 2005

What debate, Nancy? Whether or not to “do” John Murtha. Try and get with Hillary on this “In or Out” thing.

“If Saddam rejects peace, and we have to use force, our purpose is clear; We want to seriously diminish the threat posed by Iraq’s weapons of mass destruction program.” — Bill Clinton, Feb. 17,1998.

This is NOT Clinton lying about WMD’s. Oh no, never.

“We have known for many years that Saddam Hussein is seeking and developing weapons of mass destruction.” — Ted Kennedy, Sept. 27, 2002

Ted Kennedy should resign for lying about WMD’s. Just kidding… he should be in jail for drowning Mary Jo. 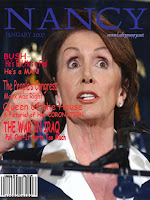