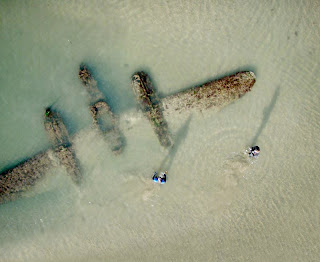 On September 27, 1942, Second Lt. Robert F. “Fred” Elliott, 24, of Rich Square, N.C. was having problems with his fuel system. Unable to remedy the situation he made an emergency landing on a beach near Cardiff, Wales. Due to wartime conditions the beach was off limits to the public.

So the P-38 fighter laid there for the next 65 years.Its remains were spotted by a family in July, but it was thought to be an unmanned drone used for aerial target practice from the 1950s. However, freakish weather conditions in the area have revealed the wreckage to be Elliott’s aircraft.

The Lightning has been identified using its serial number and other records. It was built in 1941 and reached Britain in 1942 before flying combat missions along the Dutch-Belgian coast. This makes it one of the oldest P-38’s known to exist. Among those is the P-38 “Glacier Girl”. 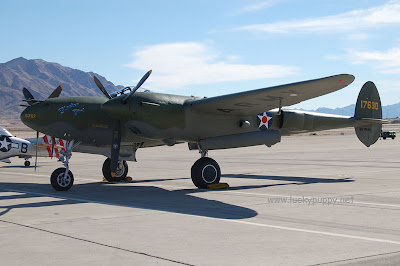 Glacier Girl-2006
“Glacier Girl” was discovered discovered under 250 feet of ice in Greenland. Having crashed on 15 July, 1942, it had lain there for over fifty years before in was recovered and restored to flying condition. A number of groups have expressed interest in recovering Elliot’s plane. It’s rusted state makes the probability of its being restored to flying condition highly unlikely.Robert Elliott (64), is the nephew of pilot Robert Elliott and has spent 30 years researching his wartime career. Less than three months after the crash and after 10 successful combat missions, Elliott was shot down over Tunisia. Neither his P-38 nor his body was ever found. His wartime diary mentions the Welsh crash but isn’t very verbose:
“Ditched a P-38 and was uninjured”
Looting of historical sites is a problem in the United Kingdom. British aviation publications have been circumspect about disclosing the exact location, and local Welsh authorities have agreed to keep the plane under surveillance whenever it is exposed by the tides of the Irish Sea, he said. For now, the aircraft is again buried under sand.