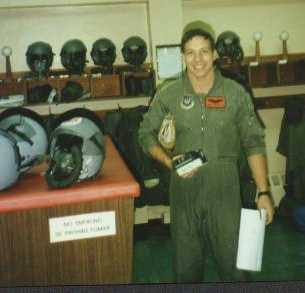 I vividly remember the day of the crash. The weather was very bad that day. The first sortie was recalled and we were able to refuel only two aircraft before fueling went on weather hold as well.

Capt. Mike Crandall was off station that day , but he and his wingman “snuck in ” under the weather. I was expediting that day and picked him up at the airplane. He asked about our jet (84-1292). I told him that it was in the garage (phase inspection). As I dropped him off at ops he said “Remind me about nose art when I get back.” Those were the last words I heard Mike say.

Back in ops, LtCol. Rick Huss told Mike that Capt. Bob McCormack still needed to be upgraded to flight lead and Mike volunteered to take him up. Bob was to fly 1395 and Mike 1401 the only two aircraft refueled.

On start up Bob had hydraulic indication problems and we fixed them. Mike was in the other flight so I didn’t know he was flying.

The aircraft were configured without external fuel tanks so their flight time was less than a hour. After an hour passed, we figured they “weathered in” at some other bases as it was common. After 90 minutes I was radioed to meet with my supervisor. He asked for me to quietly get the maintenance forms for 395. Fearing the worst I asked him if the aircraft was lost. he said “Just get the forms and don’t discuss anything with anyone.”

The aircraft had collided. Bob was thrown (not ejected) out of the jet. He landed in a farmer’s field with a broken back. A farmer’s daughter (yes this is true) picked him up in the family car as he was walking toward the farm house. He phoned in the base to report the collision.

The squadron was monitoring the SAR net, listening to the search effort. There were two beepers going off. In the other room, Capt. Karl Gruner was listening to German radio hoping for a news report. When Bob phoned, they then began looking for Mike. It was then that German news reported that two F-16’s had in fact collided, resulting one pilot dead and one severely injured. That is how we found out that Mike was dead. The Polizei had found his body, he had had a good chute but he died in the collision.

I went home not knowing that. Knowing two jets were down, I prayed the crew chief prayer that all pilots were safe. The next morning I read in the Stars and Stripes, that Captain Michael A. Crandall had died the night before.

I sat in my stairwell and cried .

Mike was my pilot and my friend. He is buried at the Academy. Every now and then I see cadets serving at Nellis AFB. If I get a chance to talk I tell them that when they are struggling and don’t think they can hack it, to visit Mike. We lost many, many friends during the Cold War. Let no one forget that there was and still is great valor on “routine training missions”. 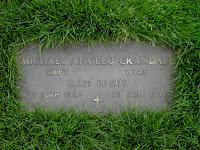 Mikey is at the Air Force Academy,