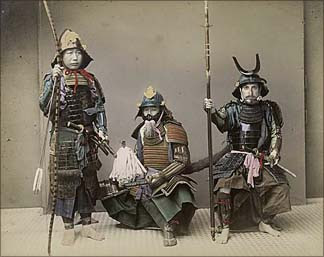 It had been ordered that the execution should take place in the garden of the yashiki. So the man was taken there, and made to kneel down in a wide sanded space crossed by a line of tobi-ishi, or stepping stones, such as you may still see in Japanese landscape-gardens. His arms were bound behind him. Retainers brought water in buckets, and rice-bags filled with pebbles; and they packed the rice-bags round the kneeling man–so wedging him in that he could not move. The master came, and observed the arrangements. He found them satisfactory, and made no remarks.
Suddenly the condemned man cried out to him:
“Honored sir, the fault for which I have been doomed I did not wittingly commit. It was only my very great stupidity which caused the fault. Having been born stupid, by reason of my karma, I could not always help making mistakes. But to kill a man for being stupid is wrong–and that wrong will be repaid. So surely as you kill me, so surely shall I be avenged;–out of the resentment that you provoke will come the vengeance; and evil will be rendered for evil.”
If any person be killed while feeling strong resentment, the ghost of that person will be able to take vengeance upon the killer. This the samurai knew. He replied very gently–almost caressingly:
“We shall allow you to frighten us as much as you please–after you are dead. But it is difficult to believe that you mean what you say. Will you try to give us some sign of your great resentment–after your head has been cut off?”
“Assuredly I will,” answered the man.
“Very well,” said the samurai, drawing his long sword;–“I am now going to cut off your head. Directly in front of you there is a stepping-stone. After your head has been cut off, try to bite the stepping-stone. If your angry ghost can help you to do that, some of us may be frightened. . . . Will you try to bite the stone?”
“I will bite it!” cried the man, in great anger–“I will bite it!–I will bite–”
There was a flash, a swish, a crunching thud: the bound body bowed over the rice sacks–two long blood-jets pumping from the shorn neck;–and the head rolled upon the sand. Heavily toward the stepping-stone it rolled: then, suddenly bounding, it caught the upper edge of the stone between its teeth, clung desperately for a moment, and dropped inert.
None spoke; but the retainers stared in horror at their master. He seemed to be quite unconcerned. He merely held out his sword to the nearest attendant, who, with a wooden dipper, poured water over the blade from haft to point, and then carefully wiped the steel several times with sheets of soft paper. .. . And thus ended the ceremonial part of the incident.
For months thereafter, the retainers and the domestics lived in ceaseless fear of ghostly visitation. None of them doubted that the promised vengeance would come; and their constant terror caused them to hear and to see much that did not exist. They became afraid of the sound of the wind in the bamboos–afraid even of the stirring of shadows in the garden. At last, after taking counsel together, they decided to petition their master to have a Segaki-service performed on behalf of the vengeful spirit.
“Quite unnecessary,” the samurai said, when his chief retainer had uttered the general wish. . . . “I understand that the desire of a dying man for revenge may be a cause for fear. But in this case there is nothing to fear.”
The retainer looked at his master beseechingly, but hesitated to ask the reason of this alarming confidence.
“Oh, the reason is simple enough,” declared the samurai, divining the unspoken doubt. “Only the very last intention of that fellow could have been dangerous; and when I challenged him to give me the sign, I diverted his mind from the desire of revenge. He died with the set purpose of biting the stepping-stone; and that purpose he was able to accomplish, but nothing else. All the rest he must have forgotten. . . So you need not feel any further anxiety about the matter.”
And indeed the dead man gave no more trouble. Nothing at all happened.