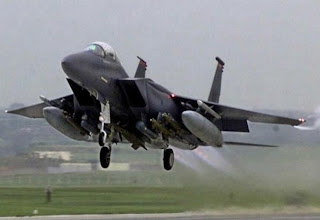 Air Force officials are taking steps to lift the grounding orders on at least part of its F-15 fleet. The newest of the supersonic fighters, the F-15E Strike Eagles are to return to action if they pass a detailed visual and non-destructive inspection.

Witnesses to the crash saw the aircraft break up just aft of the cockpit. This and evidence recovered from the crash site has led USAF officials to issue a Time Compliance Technical Order (TCTO). The TCTO calls for mandatory visual and non-destructive inspection of the hydraulic lines, fuselage longerons, and straps and skin panels around the environmental control system bays. 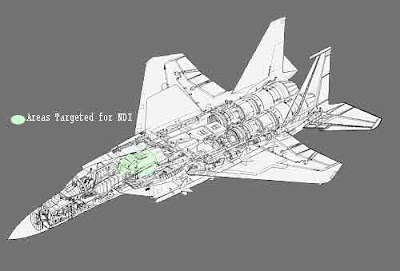 Original concern over the structural integrity of the vertical stabilizers has been premature.

The F-15E is the newest of the five models of the Eagle and was not involved in the crash. The older models will remain grounded until the full investigation is complete. This process may take another 30 days.

Gen. John Corley, ACC commander, said the F-15 remains vital to the defense of the nation and to joint forces serving in the U.S. Central Command area of responsibility.

In a statement released through the Robins public affairs office, General Corley said:

It was previously reported that the pilot involved in the mishap was uninjured. This was erroneous. The pilot, a member of the 131st Fighter Wing, successfully ejected but suffered a broken arm, a dislocated shoulder and several cuts and bruises.The pilot was taken to a St. Louis hospital Nov. 2 but released the following day.

The pilot’s name has not been released.

On 2 November, a F-15C belonging to the Missouri Air National Guard crashed. The pilot was uninjured and reported “structural failure” as the initial cause.

All models of the F-15 Eagle, including the F-15E “Strike Eagle” (pictured above), have been grounded pending the outcome of the official investigation. Combat taskings will be covered by other assets. The aircraft carrier U.S.S. Harry S. Truman (CVN-75)left Norfolk,Virginia on 7 November. This was a planned deployment replacing the U.S.S. Enterprise (CVN-65) currently on station in the Arabian Sea. However it was announced that the Truman will be assuming some of the F-15 combat missions.

The investigation is still on going and for that reason I’ve held off jumping on the band wagon to report this. The mishap aircraft was 27 years old. This is getting long in tooth for fighter aircraft. Caution is the word of the day for an aging fleet and groundings are a common precautionary response. After the official investigation concludes and a fleet wide inspection completed, the F-15 is expected to return to service.

The crash highlights a structural design flaw in the tail of the F-15 that was identified in the 1990’s. Then 9/11 happened. The increased mission tempo brought on by the war has brought renewed focus on Non-destructive Inspections (NDI) to discover and repair defects . The Air Force x-rays the aircraft on a scheduled basis to see if anything is cracking. The grounding will no doubt provide an opportunity to NDI the fleet before anything else happens.

The F-22 “Raptor” is operational and is scheduled to replace the Eagle. The Air Force has ordered 187 of them to replace 688 Eagles. If this incident accelerates the F-15 retirement, it might be a hard row to hoe to get Congress to pay for any more of the 133 million dollar F-22’s.