The history of human flight goes back to Icarus. Since 2000, a small group of parachutists have been doing jumps that Icarus would be proud of.

Since the 1930’s inventors have been trying to develop a means of attaching wings to people and letting them fly. Between 1930 and 1961 71 out of 75 people have died trying to perfect a “wingsuit”. French skydiver Patrick de Gayardon invented a wingsuit which brought the endeavor into the modern age. Unfortunately he died on April 13, 1998 while testing his latest modification.

The accident slowed progress in wingsuit development until 2000. Enter
Loïc Jean-Albert who perfected a one wing design and has marketed it as “Crossbow”. He has since founded the company “Fly Your Body”. 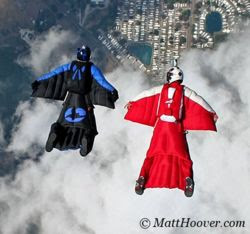 matthoover.com
Since 2000, the use of wingsuits has grown in popularity. The United States Parachute Association (USPA) recommends in the Skydivers Information Manual, that any jumper flying a wingsuit for the first time have at least 200 jumps and be accompanied by an instructor or 500 jumps experience without instruction.

Watch Jean-Albert Do His Thing

B.A.S.E. jumper Jeb Corliss and test pilot Luigi Cani are currently testing the wingsuit in a World Recod attempt to land safely without using a parachute. An attempt can come as early as 2008.