If you don’t know this, I participate in Stumbleupon.com.

Each stumbler has a blog and these include a avatar and a statement of introduction. For example, this is my avartar. 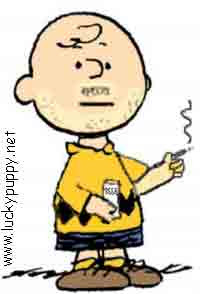 My intro line is:

“It’s better to Loved and Lost than have to with live a Psycho Bitch.”

As I’ve stumbled I’ve come across other unique, imaginative and well, honest people.

i eat your kind for breakfast.- Becky86
Straightforward and honest, thanks Becky.

Weeding out the shit sites, one stumble at a time.– realitybites
This chick rocks! Well worth the time to read.

This space intentionally left blank. Except for that and this sentence.–lightchaser

annacas
Many people post their own picture.
Few do it with style. This is pretty good.

lostshady
This one is priceless!

solitarypagan
Seem to have an angel theme going here.

A pretty cool avatar too.

I should really spend less time web-surfing, but my cats won’t let me up.
–needsmorecoffee

Oatmeal is my favourite sport. Im a metaphor for the internal combustion engine. I once raced a squirrel to the top of a maple tree and won. I square dance on round tables. I have crossed the state of Wyoming on a pogo stick. Speedvision has already purchased the rights to televise my funeral procession. I can breathe underwater. I trained an orphaned bear cub to fetch my newspaper every morning. I have brushed elbows with world leaders and brushed lint off my knickers. I was raised by a pack of wild platypuses. I won the Iditarod sled race with my team of specially-bred boars. I won the lottery and was struck by lightning on the same day. I cheer for pigeons. I have influenced the Beatles, Jimi Hendrix, and Salt-N-Pepa. I enjoy pole-vaulting in the park. Men are puzzled by my charm. My collection of designer egg-slicers has international appeal. By sledding down the North Face of Mt. Everest I set the world land-speed record.
–chlorinatedpie