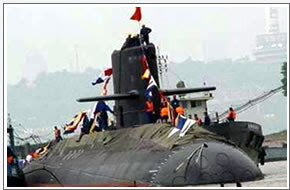 November 10, 2007-Oh shit! The aircraft carrier U.S.S. Kitty Hawk (CV-63) was in the Pacific, conducting an exercise with her battle group. On day two of the exercise she got a rude surprise from an uninvited guest.

A Song class submarine of the Chinese navy penetrated the defenses of the battle group and surfaced within visual range of the U.S.S. Kitty Hawk. The sub had remained undetected throughout it’s approach. This placed the U.S. carrier well within the range of the sub’s Yu-4 torpedoes and her Yingji-82 anti-ship missiles. 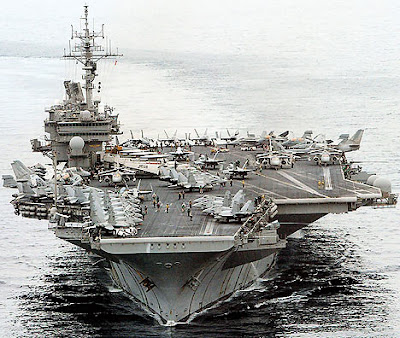 The Song class is a recent Chinese design with the flag ship first putting to sea on 25 May, 1994 (pennant number 320). The Chinese Navy has launched three of these boats, the last one in November 2003.

The advanced design of the sub, some intelligence officials have noted has benefitted from the transfer of U.S. techonolgy to China during the Clinton Administration.

The incident led to tense diplomatic exchanges, with shaken American diplomats demanding to know why the submarine was “shadowing” the U.S. fleet while Beijing pleaded ignorance and dismissed the affair as coincidence.

The U.S. Navy has been given a serious wake up call.