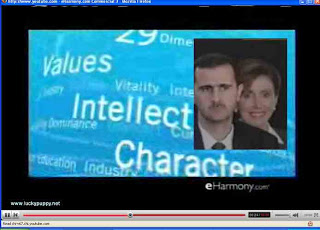 Did not Rudolph Hess fly to England in World War Two to try and negotiate a separate Peace with the Allies? He wound up with a life sentence didn’t he?

Oh my the Times are changing.

It this capacity the President can send forth anyone he wishes to conduct such diplomacy. Witness trips by Jesse Jackson, Jimmy Carter and others who have been dispatched by the President to act in his behest.

Reactions by President Bush clearly indicate that these mechanisms were not in play for the Pelosi junket.

Nancy Pelosi took an oath of office to protect and defend the Constitution and yet she continues to fly in the face of it.

Pelosi say that the Democrats were elected with a mandate from the People. Fair enough. A mandate to express the views of the electorate to the Executive Branch. Not a mandate to execute foreign policy on her own.

2 thoughts on “Pelosi Flies to Syria”