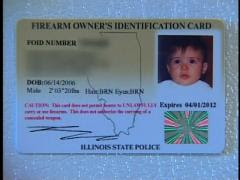 The State of Illinois issued a 10-month-old boy a gun permit. The little boy’s grandfather bought him a shotgun as an heirloom.

Police in Illinois said there aren’t age restrictions on gun permits there. All it requires is a signature by the child’s guardian.

May 15, 2007-A blind man who has concealed weapons permits in North Dakota and Utah says he’s not a danger to society, even though he can’t see the gun he’s shooting.

Carey McWilliams, 33, says he has followed all the required rules, and he wants Minnesota to join other states that have granted him a concealed weapons permit. He says he was rejected first by a Minnesota county sheriff and then by a judge in that state. Read the whole story.