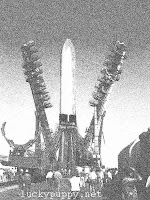 April 2 — Amid reports that it is fueling a missile for launch as soon as this weekend, North Korea escalated threats on Thursday against a worried neighbor, warning that it would attack “major targets” in Japan if Tokyo shot the missile down.

North Korea has shifted MiG-23 fighter jets to its east coast, near the missile launch site, according to South Korean media reports.

President Obama, in London for the Group of 20 summit, criticized the launch Wednesday as a “provocative act” that would violate a United Nations resolution and trigger a response from the U.N. Security Council. The leaders of Japan and South Korea agreed in London that the launch, if it occurred, should be addressed by the Security Council.

The three countries have dispatched ships with antimissile systems to monitor the launch, which they describe as a test of a long-range ballistic missile that could fly as far as the western United States. North Korea is trying to miniaturize nuclear warheads to fit atop its growing arsenal of missiles, U.S. intelligence officials have said.

North Korea says the missile is part of a peaceful research effort to put a communications satellite into orbit.

One thought on “NO DONG Missile on Launch Pad”