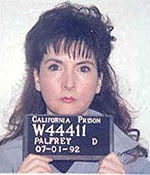 It is not known whether the woman currently teaches at the Academy. However phone records reveal that she contacted Palfrey as recently as October, “wanting to go back to work because she had been on a hiatus for a while.”

Read more of the story.