General Paul Warfield Tibbets Jr has died after a two-month decline in health. He was 92.

Paul Warfield Tibbets Jr was born in Quincy, Illinois, in 1915 and spent most of his youth in Miami. He enlisted in the Army Air Corps in 1937 and led bombing operations in Europe before returning to test the Superfortress.

The then Col Tibbets named his B-29 Enola Gay after his mother.

Tibbets was the Commander of the 509th Bomb Group and piloted the B-29 mission which dropped the atomic bomb on Hiroshima Japan. 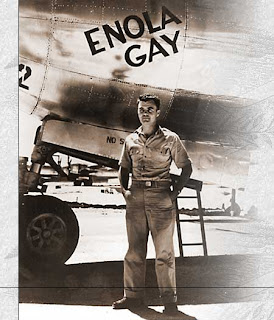 On the 60th anniversary of Hiroshima, the surviving members of the Enola Gay crew – Gen Tibbets, Theodore J “Dutch” Van Kirk (the navigator) and Morris R Jeppson (weapon test officer) said: “The use of the atomic weapon was a necessary moment in history. We have no regrets”.

Gen Tibbets said then: “Thousands of former soldiers and military family members have expressed a particularly touching and personal gratitude suggesting that they might not be alive today had it been necessary to resort to an invasion of the Japanese home islands to end the fighting.”

In 1995, Gen Tibbets denounced as a “damn big insult” a planned 50th anniversary exhibition of the Enola Gay at the Smithsonian Institution that put the bombing in context of the suffering it caused.

He and veterans groups said too much attention was being paid to Japan’s suffering and not enough to its military brutality.

General Tibbets had asked for no funeral nor headstone as he feared opponents of the bombing may use it as a place of protest, the friend, Gerry Newhouse, said.