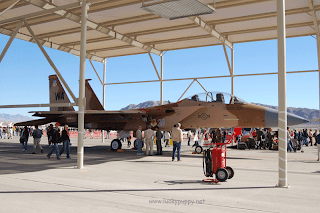 An F-15D assigned to the 65th Aggressor Squadron crashed while participating in the Red Flag exercise conducted from Nellis AFB, Nevada. It was reported that one of the two man crew died in the crash. The other pilot was transported to Mike O’Callaghan Federal Hospital and was listed in stable condition and is under observation.

The 65th Aggressor Squadron is based at Nellis AFB. The cause of the crash is still under investigation and a formal news briefing is scheduled for Thursday.

The F-15 fleet was grounded after the investigation of a November, 2007 crash revealed a design defect which weakened the forward fuselage. The F-15 Eagle was first flown in July, 1972. It has never been defeated in air to air combat.

The U.S. Air Force plans to replace the F-15 fleet with the F-22 Raptor which is now operational.