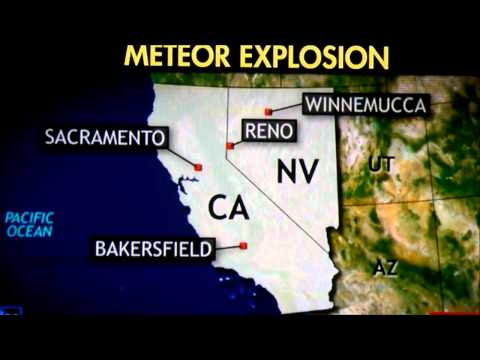 ou hear it Sunday morning? A very large explosion was heard in Northern Nevada and parts of California. Rattling windows for hundreds of miles around, many thought it was an earthquake.  But it wasn’t. Astronomers have said that it was “likely” to have been a meteor exploding as it entered our atmosphere.

911 rang off the hook and many people called to report seeing a flaming object streak across the morning sky. A Reno, Nevada woman actually got a snap shot of the event. Channel 8 News (KLAS) used the photo in their breaking new report at 11:54AM. Oddly enough, the picture was absent at their 9:09PM update.

Makes you want to say “Hmmmm?”

I got a look at the picture and it reminded me of the went Shuttle Columbia broke up at it reentered the atmosphere.

If I took that picture, it would be all over the news. I’d sell it to the highest bidder. Why not? It’s

CBS news just put the picture up. Credit was given to Lisa Warren. Let me go back and Google it before I shoot my mouth off. They credited the picture to the Reno Gazette Journal but even they don’t have the picture up.

Kinda make you think. Sure, it could have been a meteor. But it exploded in mid air leaving no evidence. If we don our foil helmets for a minute we could discuss the smoldering cylinder found near Reno. However, lacking reports of Giant Tripods burning Lake Tahoe to the ground, it probably was a meteor.

OR MAYBE IT WAS……

Aurora coming back from a mission and exploding (or maybe just slowing down).
+

Nah…was most likely a meteor. Move along people nothing to see here.

One thought on “Explosion Rocks Nevada”