We’ve collected some stuff that will give you the willies.

This pic was taken at the Crumlin Road Prison in Belfast, Ireland -17 executions, multiple murders and suicides have all happened here. This photo was taken near Cell 13 where prisoners would spend their last night before execution -when this gentleman  jumped into a standing coffin for a photo op and as it turned out,he wasn’t alone! “Hobo Nickels” is the name for an art form that has been around for as long as man has made coins. With the coinage of the Indian Head nickel the carving of “Hobo Nickels” became popular in the U.S.[1] This picture was taken in Manila, Philippines on a Nokia 7250 phone.[2] Neither of the girls report any strange feeling or a presence at the time the picture was taken, but the fact that the picture has been taken with a digital camera makes the possibility of a double-exposure unlikely. Caryl Chessman was executed at San Quentin, California on May 2, 1960. Shortly after the execution had started and Chessman was already reacting to the hydrogen cyanide gas, the telephone rang. The caller was a judge’s secretary informing the warden of a new stay of execution. The warden responded, “It’s too late; the execution has begun.” There was no way to stop the fumes or open the chamber door and remove Chessman without the fumes killing others.[3] Due to her nervousness, the secretary had initially dialed the wrong telephone number and lost valuable seconds in getting the call through.   Case in point, the photographer took this shot of an American prisoner strapped into a chair in a gas chamber as he is sentenced to death. The prisoner’s black hood carries a Westinghouse Electric Company logo. In the early 19th century  photography became affordable to the masses.  Rather than commission a portrait in oil, it was quicker and cheaper to commemorate the dearly departed with a photo.  Children were posed in a crib or their Mother’s arms.  Adults were usually posed in a chair.[4]

Mrs. Mabel Chinnery was visiting the grave of her mother one day in 1959. She had brought along her camera to take photographs of the grave site. After snapping a few shots of her mother’s gravestone, she took an impromptu photo of her husband, who was waiting alone in the car. At least the Chinnerys thought he was alone.

When the film was developed, the couple was more than surprised to see a figure wearing glasses sitting in the back seat of the car. Mrs. Chinnery immediately recognized the image of her mother.[5] 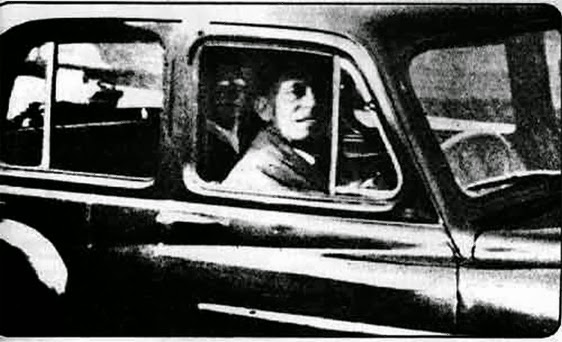 One thought on “Creepy Stuff for Halloween”