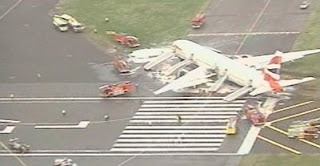 17 JAN 2008.
An British Airways Boeing 777 has crashed at Heathrow Airport, London, U.K. It is the first crash of Boeing newest airliner. All of the 136 passengers and crew survived the mishap. 19 were injured, many suffering minor injuries.

Flight BA038 was on final approach to the runway when the aircraft suffered a total loss of power.

Captain Peter Burkill calmly announced to his co-pilot: “I’ll just have to glide it in.” Burkill and his crew managed to keep the 777 airborne as they flew over houses, schools and offices – clearing Heathrow’s perimeter fence by just five feet before crash-landing into a field 500 yards short of the runway. The aircraft came to rest with major damage to its landing gear and engines.

“We are very proud of the way our crew safely evacuated all 136 passengers on board. The captain of the aircraft is one of our most experienced and has been flying with us for nearly 20 years,” he added.

They showed great courage and professionalism in landing the aircraft safely. All of the crew did a fantastic job evacuating the 136 passengers. They are all heroes and everyone at British Airways is very proud of them.

An investigation is being conducted by the Air Accidents Investigation Branch so it would be inappropriate to speculate about the likely cause of this incident.”

An airport worker was quoted as saying, “It’s a miracle he managed to land it. The man deserves a medal as big as a frying pan. He has done a fantastic job.”

The UK Air Accident Investigation Branch will lead the inquiry into the crash landing. A team from the U.S. National Transportation Safety Board is also heading to London, accompanied by representatives from Boeing and the Federal Aviation Administration.

The 777 first entered service in 1995 and is currently being flown by 32 airlines around the world.

One thought on “Boeing 777 Crashes at Heathrow”