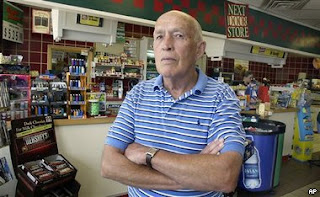 GRAND RAPIDS 25 June 2007— Bill Barnes says he was scratching off a losing $2 lottery ticket inside a gas station when he felt a hand slip into his front-left pants pocket, where he had $300 in cash.

He immediately grabbed the person’s wrist with his left hand and started throwing punches with his right, landing six or seven blows before a store manager intervened.

“I guess he thought I was an easy mark,” Barnes, 72, told The Grand Rapids Press for a story Tuesday.