There is only one of them so far and it has flown seven times. It has had a mysterious ground abort at Pax River awhile back and to my knowledge hasn’t flown since.

Packaged as the Joint Strike Fighter, it will be flown by all of our services and as many allies as we can convince.

We have tried this before. In the sixties Defense Secretary Robert McNamara pushed the idea of a universal fighter plane. It resulted in a rounding success, the F-4 Phantom and an utter disaster, the F-111. Before you Aardvark fans go berserk, yes the F-111 became an historically great aircraft. For the Air Force. As a Joint Fighter it never cut it. It was too heavy for carrier operations which left the Navy and Marines high and dry. This was after the “Weight Reduction Program”, the “Super Weight Reduction Program” and the (I’m not making this up) “Colossal Weight Reduction Program”. The result was a snub nosed version of the F-111 that still didn’t have the range or the payload to get off of a deck. 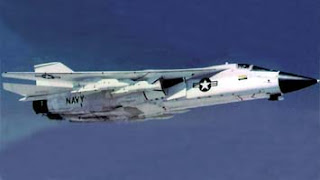 The F-111B
Don’t misunderstand me. I’m hoping that the F-35 turns out to be everything it’s designers (and the DoD) says it can be. On the other hand, aren’t we reinventing the wheel here? History repeating itself?

Australia, God Love them, has agreed to go ahead with the F-35. However, there are questions being raised on whether the F-35 is right for Australia. This video raises more than a few good points. It begs the question, “Is the F-35 right for America?”