No joke. Boeing is developing the Precision Aerial Fire Fighting System. Currently wildfires are fought from the air by dropping massive amounts of water and suppressants over a wide area.
With the PAFF, fires would be fought with precision strikes. The Air Force will be dropping water balloons from C-17 aircraft. 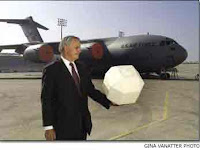 Using current deployments techniques, C-17 aircraft will deliver pallets of biodegradable “beach balls” each unit containing 50 gallons of water. Multiple hot spots can be attacked. More water could be delivered with fewer missions. Accurate deliveries can be made at safer altitudes and speeds.

So how does a beach ball do the trick? The system uses up to 2,800 biodegradable, faceted spheres stacked on pallets within cardboard containers. This delivery technique is similar to the way U.S. Air Force C-17s airdropped yellow humanitarian ration packages to Afghanis in 2001.

The unit’s spherical shape minimizes airflow resistance. Each sphere contains 50 pounds of water and easily remains intact while it falls true to target. The spheres burst on impact at the heart of the fire. A single C-17 PAFF mission could airdrop 140,000 pounds of water on multiple “hot spot” targets—equivalent to nearly 100 helicopter deliveries.