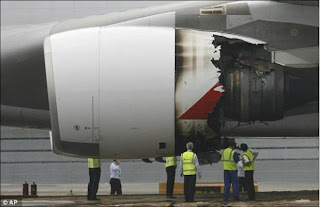 Fifteen minutes into a Quantas airline flight Qf34 from Singapore to Sidney, the number two engine exploded. Trailing flame and debris, the aircraft landed safely back in Singapore. Though shaken, none of the 459 passengers were harmed in the mishap. Quantas continues to have an unblemished record of having never injured a passenger.

The investigation continues as Quantas announced that the cause of the explosion was yet to be determined. This is the third engine malfunction for the A380. In September last year another Rolls Royce powered A380, this time operated by Singapore Airlines, was forced to turn back two hours and 45 minutes after leaving Paris on a flight to the Far East, because of an engine malfunction. In August a Lufthansa A380 flying from Tokyo to Frankfurt was forced to shut down one of its four Trent 900 engines shortly before landing, after crew detected a change in oil pressure.